Personal Hymns for your Kids

If you read yesterday’s post, you’ll recall my disillusionment with much of modern church music.  However, I love hymns.

When I was a child, I don’t recall feeling all that fond of hymns.  I remember, when we would sing one with a lot of verses, hoping the leader would call for us to omit a few.  But perhaps it’s taken the removal of hymns from church now to make me appreciate them.

I enjoy their harmonies and the rich messages of their texts.  I vividly recall standing in the soccer field as a chubby and klutzy 4th grader in gym class (gym was the bane of my existence), singing “Count Your Blessings” in my head.  It was a comfort!

So that my girls have some exposure to the great hymns of the church, I like to read about a hymn’s history each night after dinner, and then I play it on the piano.

Did you know … John Newton was captain of a slave ship.  Reading the Bible, he felt convicted that what he was doing was wrong, and decided to study to be a minister instead.  He later wrote “Amazing Grace”  out of the gratitude he felt for God’s forgiveness.

Or, how about Eliza Hewitt, who became an invalid for a time after an injur.  She wrote “When we All Get to Heaven” in anticipation of the time when we will be free from our often cumbersome earthly bodies.

Both these stories were from “Hymns for a Kid’s Heart”, which comes in several volumes and which I highly recommend.

Additionally, I have chosen a “personal” hymn for each of my girls.  For my oldest, who is responsible and tries so hard to do what is right, it’s “Take My Life and Let It Be”.

My middle daughter was always laughing and smiling, and so joyful.  So, hers is “In My Heart There Rings a Melody”.

And you know how it goes with the third child.  One day when she was a toddler I realized I hadn’t chosen a hymn for her.  We had recently read about “Holy, Holy, Holy”, and she was always walking around the house singing that phrase.  It was so cute, and I decided that THAT was the hymn for her. 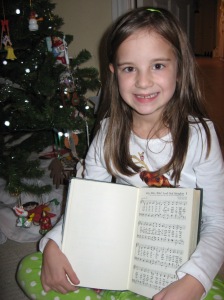 Credit for this idea goes to a Focus on the Family radio program I heard years ago.  The speaker had also chosen hymns for each of her children, and I think she said that several of the kids had even had their hymns played at their weddings.

It’s a neat idea for your child to have a “life hymn”, similar to life verses that many people have.  Is there a hymn that would be great for your child?

For more neat ideas, head on over to Rocks in My Dryer.

I love to hear from you! Thanks for taking the time to join the community by leaving a comment. Cancel reply

This site uses Akismet to reduce spam. Learn how your comment data is processed.

This work is licensed under a Creative Commons Attribution-NonCommercial-NoDerivs 3.0 Unported License.